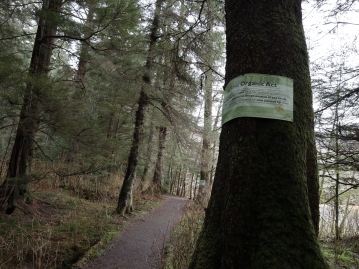 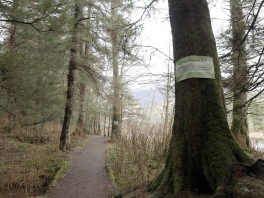 May 17, 1884: The First Organic Act: An act providing a civil government for Alaska
“… SEC. 8. That the said district of Alaska is hereby created a land district, and a United States land-office for said district is hereby located at Sitka … Provided, That the Indians or other persons in said district shall not be disturbed in the possession of any lands actually in their use or occupation or now claimed by them but the terms under which such persons may acquire title to such lands is reserved for future legislation by Congress … ”
An act providing a civil government for Alaska. Alaska State Library. Documents: ASL-KF50.U58v.23—p26.

“In the longer term, however, especially the Han people living in the Klondike region suffered from the environmental damage of the gold mining on the rivers and forests, as well as from the creation of Dawson City. Their population had already begun to decline after the discovery of gold along Fortymile River in the 1880s but dropped catastrophically after their move to reserve, a result of contaminated water supply and smallpox. The Han found only few ways to benefit economically from the gold rush and their fishing and hunting grounds were largely destroyed; by 1904 they needed aid from the North West Mounted Police to prevent famine.” “Cultural Impact of the Klondike Gold Rush.” National Park Service. https://www.nps.gov/klgo/learn/education/classrooms/gold-rush-impact.htm. Web. Accessed 17 January 2017.

“WordWrap 2017: Historical Reflections on the Law of the Land.” Created by Lisa Link for the Alaska Sesquicentennial Commemorative Exhibit, “Voices of Change: Perspectives on the Transfer of Alaska from Russia to the United States” at Sitka National Historical Park.